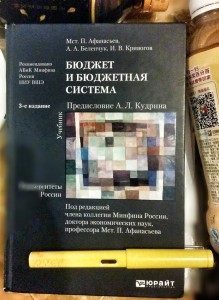 Coming from a monetary policy background I still find it buffing how much more complex is fiscal policy. There’s a substantial number of levers that central bank can use. Still you might call the key rate The Instrument.
When it comes to fiscal policy volume of revenue and spending, their structure and a universe of related issues come into play so that bottom line deficit/surplus alone is far from being an indicator of fiscal policy stance. This not even looking at issues of budget federalism or politics of the budget process.
I gather, this complexity of the topic does not lend it to clear exposition.
The result is, there’s still no decent book on fiscal policy in Russia. I went through a couple of textbooks which were not substantial enough to mention here, before deciding to give a closer look at ‘Budget and fiscal system’  by Mstislav Afanasyev.
The book had a promising feature of being authorised by Alexey Kudrin who was behind many of the current features of the fiscal system including the Reserve fund and NWF, medium term budget planning, fiscal rule etc.
Having spent a fair amount of time with this book I’ve come to the conclusion that it might be one of the better books on fiscal policy in Russia. But this resulted not because of high quality of the text but because the bar is set at quite a low level.
Some of its more visible shortcomings below.
Extensive quotes from the Budget code, weak on economics
The book is basically an introduction into the fiscal law, but it does lack any analysis of the fiscal system from the economics view point. Even such basics as cross country comparative tax burden analysis, efficiency of spending, tax collection efficiency are avoided.
Weak on case studies, examples
The text is close to sterile when it comes to the intersection of law and its application. There’re exactly zero information on problems of fiscal federalism, fiscal discipline on regional and municipal levels and politics seem to be absent from the budget process.

The text is written in the this variety of language which you might expect to find in legal papers, but which seems much less appropriate for the textbook. Many paragraphs are word by word repetition of text in the preceding paragraph with the difference being that the same idea applies for example to two levels of the budget system. I think a more thorough editing would allow to cut up to a forth of the text. 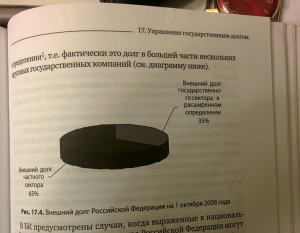 The rediculous pie 3d charts
The 3D pie charts (authors favorite type of chart) occupy up to half of the page to show the relationship between two numbers.
Stub chapters: sovereign external lending
The chapter on external lending of the country is basically a plan to write a chapter. In the chapter explicitly devoted to external debt there’s no single example of external lending of any country, not to say discussion of the terms or a purpose of such a loan.
The philosophical chapter fetish
For some reason the book devotes a whole complete chapter on the philosophy of the fiscal system which goes as far as discussing the nature of the state. It tries to cover everything from Thomas Aquinas to Mikhail Bakunin. The reason for this escapes me.

My personal preference would be for more detailed presentation of the core material.

All in all, it is hard to recommend this  this book. Text obviously needs work: more cases, examples, less repetitions etc.

To add a constructive touch, here’s a list of sources on fiscal issues which are highly readable: i) Economic Expert Group’s publications, ii) NIFI’s Financial journal is a good source but I usually only look at the articles authored by NIFI’s own researchers and skip everything else.
Afanasyev et. al: Budget and the fiscal system
Loading Facebook Comments ...