Inflation expectations at some point have become the corner stone of CBR’s monetary policy. Changes in their level are cited in each and every monetary policy press release. The most recent reference is as follows:

“… In addition, inflation expectations of households escalated in November, although projected to decrease.”

In order to identify these expectations CBR regularly orders “Public opinion” fund to conduct countrywide surveys. These surveys ask a variety of question on topics ranging from preferred savings vehicles to consumer confidence. Additionally two types of questions on inflation expectations are asked:

By averaging (or taking a median of) responses to the type 1 question one can obtain a so called direct estimate of inflation expectations. Its ease of calculation has a certain downside attached. Direct estimate has a known upside bias possibly explained by availability hypothesis, i.e. respondents reporting more recently observed or sizable price growth as inflation expectations (these are almost invariably related to food inflation), while less impressive price trends (i.e. stagnating rent) are left unacknowledged. Current CBR’s direct report provides a median of the numerical responses of 15.0% YoY and it has rarely been under 11.0% since 2010.

An alternative method helps partly alleviate the problem by simplifying the problem for the surveyed and asking them where relatively to current inflation would future trends lay.  This method is called probabilistic estimate and relies on responses to type 2 question.

Because it will be the focus of what follows let me cite the text of the question here:

“Do you believe prices in the next 12 months will:

Results are presented in the report (Russian only) as a chart: 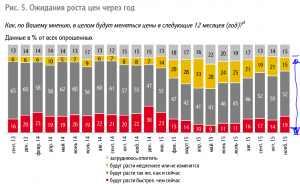 So with a short introduction to why we do this and where the data come from let’s proceed with identification methodology.

In order to recover expected inflation with probabilistic method we should make two additional assumptions:

Next we assume that when answering questions people do have some confidence intervals, i.e. regions within which inflation is assumed to be qualitatively equal. That is if I think that inflation might be -0.5 – 0.5% in the next 12mo I would likely choose “prices will remain constant” option.

Fist let’s denote the shares of the answers as follows:

Next we will get rid of those who find it too difficult forming 12mo ahead inflation expectations, making sure the remaining shares do sum to unity:

Graphically the whole picture might look as follows if we assume normal distribution: 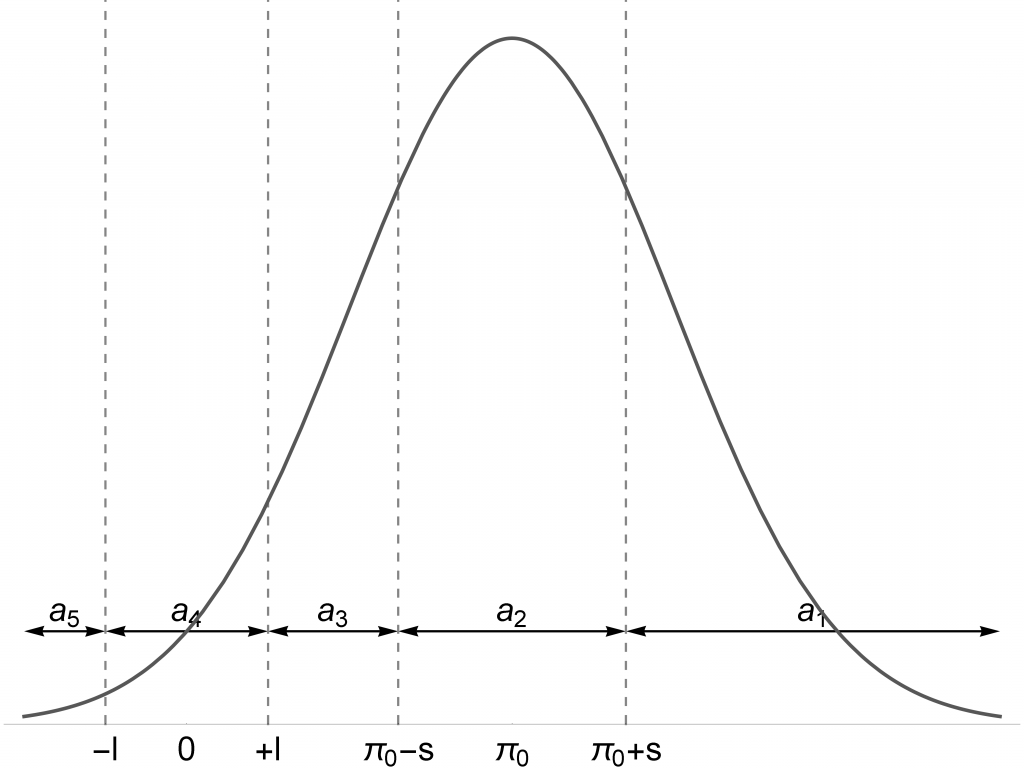 At this point we might write the following system of equations :

where $\theta[/latex] is a vector of two parameters of the distribution of inflation expectations,

This system has four unknowns:

and calculate the expected value implied by the estimated distribution.

We now can try and verify CBR reported estimates of inflation expectations for the Nov-15 wave of the survey, which put it at 15.0%. As the chart above from this report shows:

Because of the rounding effects these numbers do sum up to 1.01, so I divide them through by

For simplicity we make the uniform probability distribution assumption:

Now we can solve the whole thing numerically. I use Mathematica, which is matter of personal preference, but a suitable routine can be developed even in Excel. I assume

, so our estimate of inflation expectations is 15.0 exactly in line with the CBR.

Alternative, we can use Mathematica to calculate expected value of the distribution: [wlcode]Expectation[x, x \[Distributed] pd /. sol][/wlcode].

in the inflation expectation reports.

In the next post, we are going to decompose changes in inflation expectations into the change in the survey results and change in the