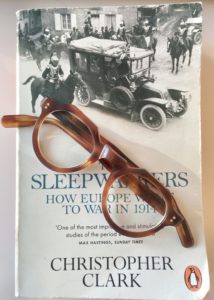 I have reservations about an extent to which studying history is ‘useful’ from the applied perspective. Historical method, in my view, has limited potential to identify more or less general and reliable regularities in the social mechanics from the economic policy point of view.

Thus the criteria on which books, such as Clark’s Sleepwalkers, should be judged are literary and entertainment value. Anyway judging it more rigorously is well beyond my expertise.  Instead of providing a review of the book (which was done by many more qualified individuals) I’ll just share three ideas that I pondered when reading the book:

Overall the book is highly recommended reading. Probably the last time I’ve enjoyed the book so completely was ‘Farewell to Russia’ by A.Levandovsky (thanks to VG for this).

Otherwise, just a handful of quotes:

Short resume of the book  by the author:

C.Clark: Sleepwalkers. How Europe went to war in 1914