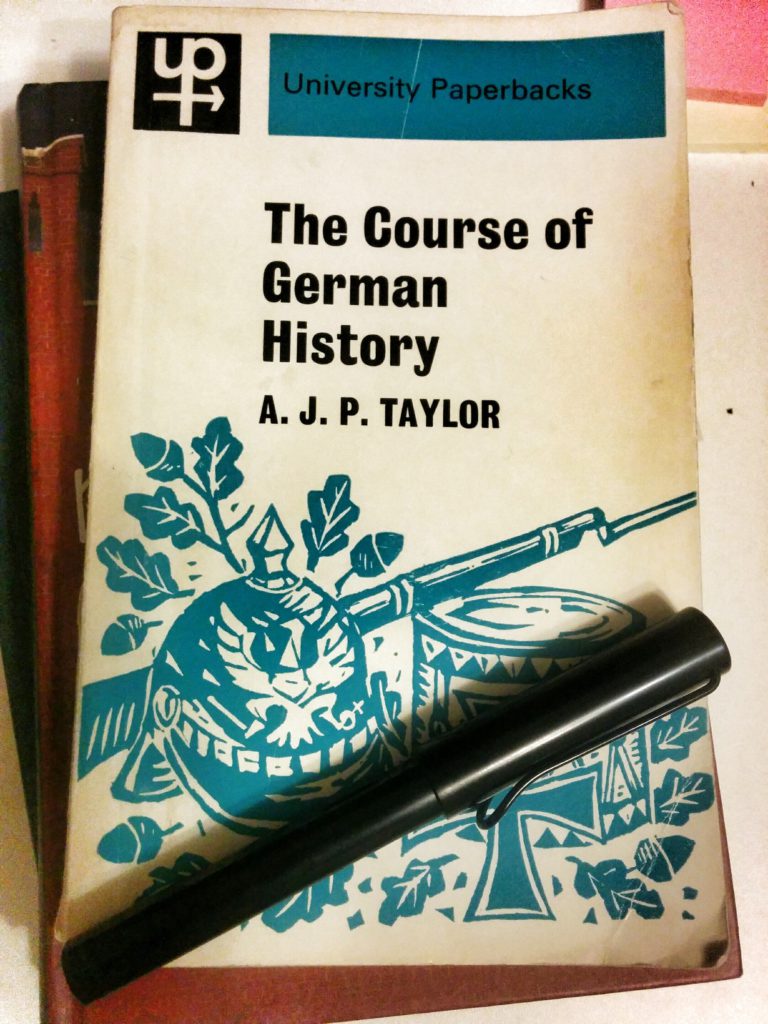 It is actually disturbing how little German history I knew before taking up AJP Taylor’s “Course..”.  I hope this might be a fairly common ‘home bias’ in historical awareness, i.e. tending to know history of other countries in as much as it does overlap with the history of your own in some generally tragic manner.

Before opening the book it is worth spending just a bit of time looking up the author, an ‘An Unusual Kind of Star‘ of the British TV and the ‘only really anti-German British historian‘. It would help the reader to prepare for a sharp take off in the first chapters.

The book itself is a very opinionated narrative of the German history covering the period from early XIX to mid XX.  There are certain interesting details about European economic history, for example the Zollverein customs union, but what I liked most were the following two more general ideas:

On German liberals in 1792-1814 (p.25): The German liberals had no agrarian program and no sympathy with the property-less masses, whom they despised as obscurantist and reactionary; nor had they any feeling that liberal institutions needed to be fought for and defended – they expected them to be bestowed from above.

On 1848 revolution (p.36): In other countries the revolution gave the people universal suffrage; in Prussia it gave them universal military service.

…and some more on 1848 (p.69): German history reached its turning-point and failed to turn. This was the faithful essence of 1848.

On the decline of parliament (p.120): The abdication of the Prussian liberals and the defeat of parliamentary government had a profound social result. Parliament did not control the state; therefore it could never be for the individual the path to power. Henceforth only man of the second rank went from the middle classes into politics. The intellectual ability of the politicians steadily, relentlessly, declined; all that survived was the gift of sterile negative criticism. Political parties became inevitably interest groups, solely concerned to win concessions from the state, but never supposing that they might have to accept responsibility. The really able and ambitious members of the middle class shunned politics and turned exclusively to industry and finance.

On creative destruction (p.139): The financial crash of 1873 was a normal event of the age of capitalism […]. In England when the speculative bubble burst, those who had blown it took the consequences […]. But the German industrialists had not the long tradition of self-help which made British capitalists fend for themselves until long into the twentieth century. Besides, they had made an implicit bargain with Bismarck: they had renounced political power in return for economic wealth, and now they expected Bismarck to keep his bargain.