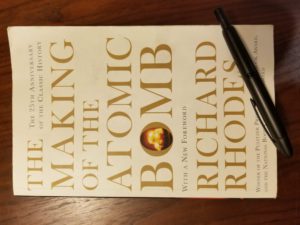 No reason for the bombing, p.99: London was nearly defenseless and at first, the military saw no reason to change that naked condition; the War Minister, the Earl of Derby, told the House of Lords that the bombing was without military significance because not a single soldier had been killed.

On community, p. 173: Why should one not be able to live contentedly as a member of the service personnel in the lunatic asylum? After all, one respects the lunatics as the people for whom the building in which one lives exists. Up to a point, you can make your own choice of an institution – though the distinction between them is smaller than you think in your younger years.

On health benefits of radiation, p.283: Because it is mildly radioactive, and radioactivity was once considered tonic, thorium was also for some years incorporated into a popular German toothpaste, Doramad.

Military double speak, p.469: “Morale” is here and elsewhere in the literature of air power a euphemism for the bombing of civilians.

On conflagrations, p.475: The bombing of Hamburg marked a significant step in the evolution of death technology itself, massed bombers deliberately churning conflagration. […] By a reflex so mindlessly unimaginative it may be merely mammalian, the bombing of distant cities, out of sight and sound and smell, was generally approved, althought neither United States nor Great Britain admitted publicly that it deliberately bombedc civilians. In Chirchills’s phrase, the enemy was to be ‘de-housed’.

On hearing a dog not bark, p.501: Soviet physicists realized in 1940 that United States must also be pursuing a program when the names of the prominent physicissts, chemists, metallurgists and mathematicians disappered from international journals; secrecy itself gave the secret away.

On halo effect, p.506: [General Groves] apparently equated disagreement with disloyalty and scaled the ratio of the two conditions directly: anyone who caused him as much trouble as Leo Szilard must be a spy.

The art of understatement, p.745: The Emperor broadcast to a weeping nation […]: “Despite the best that has been done by everyone … the war situation has developed not necessarily to Japan’s advantage, while the general trends of the world have all turned against her interest.”