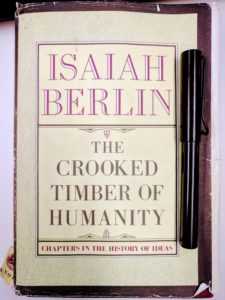 I’ve first hear Isaiah Berlin being cited some seven or eight year ago in the Adam Curtis’s “The Trap. We Will Force You to be Free” documentary [1]. The essay that Curtis references is The Two Concepts of Liberty. In this essay Berlin explores to concepts which he calls ‘positive’ and ‘negative’ liberty’. I remember being impressed by the Curtis’s resume and making a mental note explore further, may be read the original.

Fast forward some two-three of years. I was reading the opening pages of the Nate Silver’s The Signal and the Noise which the author opens up by citing Berlin’s essay The Hedgehog and the Fox. This is now very interesting, I though, I should probably read the original paper.

Fast forward to now. I finally got hold of the collection of Isaiah Berlin’s essays “The Crooked Timber of Humanity”… which incidentally contains neither “The Two Concepts..”, nor the “The Hedgehog..”.

The more I read and reread the essays the less I find it possible to provide any kind of summery to this incredible collection. One reason is Berlin’s dense in compressible writing style which makes it hardly possible even to extract a stand alone quote let alone provide a resume of the whole note. Instead I’ll simply keep a couple of extracts below. The book itself is immensely intellectually entertaining. I especially like the notes on Joseph de Maistre which are also available as Berlin’s lecture recordings below.

The decline of Utopian ideas in the West, p.24-25: “Let me put them [the main assumptions of the western thought] in the form of three propositions, a kind of three-legged stool on which the central tradition of western political thought seems to me to rest. […] The first proposition is this: to all genuine questions there can only be one correct answer, all the other answers being incorrect. If there is no correct answer to it, then the question cannot be a genuine one. […] The second assumption is that a method exists for the discovery of these correct answers. Whether any man knows or can, in fact, know it, is another question; but it must, at least in principle, be knowable […]. The third assumption, and perhaps the most important in this context, is that all the correct answers must, at the very least, be compatible with one another. […] At best, these truths will logically entail one another in a single, systematic, interconnected whole; at the very least, they will be consistent with one another […]”.

The decline of Utopian ideas in the West, p.36: “In due course the humiliated Germans began feebly to imitate their French models, and this, as often happens, was followed by a cultural reaction. The wounded national consciousness asserted itself, sometimes in a somewhat aggressive fashion. […] This is common enough response on the part of backward nations who are looked on with too much arrogant contempt, with too great an air of conscious superiority, bu the more advanced societies. By the beginning of the eighteenth century some among the spiritual leaders in the devout, inward looking German principalities began to counter-attack. This took the form of poring contempt on the worldly success of the French: these Frenchmen and their imitators elsewhere could boast of only so much empty show. The inner life, the life of the spirit, concerned with the relation of man to man, to himself, to God – that alone was of supreme importance; the empty, materialistic French wiseacres had no sense of true values – of what alone men lived by”

The decline of Utopian ideas in the West, p.48: “Immanuel Kant, a man very remote from irrationalism, once observed that ‘Out of the crooked timber of humanity no straight thing was ever made.’ And for that reason no perfect solution is, not merely in practice, but in principle, possible in human affairs, and any determined attempt to produce it is likely to lead to suffering, disillusionment and failure.”

European Unity and its Vicissitudes, p. 197: “Few things have played a more fatal part in the history of human thought and action than great imaginative analogies from one sphere, in which a particular principle is applicable and valid, to other provinces, where its effect may be exciting and transforming, but where its consequences may be fallacious in theory and ruinous in practice. It was so with the romantic movement and its nationalist implications.”

The bent twig, p.261: “Nationalism to many liberals and socialists in the west appears to be mere  chauvinism or imperialism, part and parcel of the ideology of that very establishment which has robbed the victims of their birthright. […] Is this not one of the best illustrations of the Marxist thesis that one of the greatest wrongs the ruling class does to its subjects is to blind them to their true interest, to infect them with its ideology, dictated by its own interests, as if they were identical with those of the oppressed?

Berlin, I.: The Crooked Timber of Humanity